Dr Jane Maxwell was giving a talk in Trinity in 2019 entitled ‘Dear Giddy Brat’ to Friends of the Library and Trinity Women Graduates. It was about a very precious collection of letters held in the college library which are a unique Georgian window into life in Ireland in the 1740s and 50s. These letters were written by the Church Of Ireland Bishop of Elphin, Edward Synge to his only surviving child of six children, a teenage daughter Alicia. His wife Jane Curtis had also died, so there were just the two of them when the letters were written and they chart her growth to womanhood.

This daughter Alicia was very precious and the letters illustrate a deep and affectionate relationship between father and daughter which is unexpected from a Church of Ireland high ranking Bishop. There is much teasing and banter between them. His affection for her trips off every page. He calls he Dear Miss Slyboots, his little bee, Dear Giddy Brat, Boldface, Huzzy, Saucy, Mistress and Mumper when she has toothache. He is totally preoccupied with her health and that of his servants. Given the earlier deaths of his wife and five children this is understandable and also accounts for his enthusiastic involvement with Mercers’ Hospital where he was on the board.

The BAI had put out a call for radio documentaries on women’s stories so this was a good story fit for the Lyric Feature. Little detail is known about women’s lives in 18th century Ireland so even though we don’t have the daughter’s letters, the bishop’s give an insight into Alicia’s life throughout her adolescence. Her education, what she thinks about, the books she is reading, what she ate and wore and her various ailments are revealed through the father’s side of the correspondence. He also talks about his servants and particularly his housekeeper Mrs Heap in Roscommon “who lies about all day pretending to darn.”

Witnessing History
The letters had been safely kept by the descendants of Alicia and later donated to Trinity College by Marie Louise Legg one her descendants. Every corner of the letters was written on, afterthoughts often written into the margins. There was zero waste of paper.

Jane Maxwell drew attention to the frequent corrections of spellings and grammar the bishop makes to Alicia. While pernickety, only for these, the letters probably would not have survived. Jane Maxwell explained that they were like a manual for his daughter on how to live her life, a business lesson, teaching her how to write letters, manage servants, to talk to her doctor about things like periods – which he does using French and how to run the house.

These letters were the Bishop’s only way of communicating with Alicia when he was living in Elphin, his diocese where he spent the summer months. We hear echoes of her voice and her opinions on things like child marriage, which was common at the time and they converse about gossip and the price of important things like chocolate. She had a live-in female companion Blandine Jourdan, a woman from a Huguenot family, who was employed to guide her and teach her French and she is frequently mentioned and addressed in the letters.

Music was an important aspect of life for the bishop in his public and private life. Dr Triona O’Hanlon, violinist and musical historian, talks about this aspect in her contributions to the documentary. She discovered references to Bishop Synge in the part-books of musical concerts in the Mercer’s Hospital concert and administration records. Bishop Synge had corresponded with Handel who had spent time in Dublin and his concerts were an important source of funds for Mercers. Hospitals were always expensive to build and fund in Dublin.

In the summer of 2020 I finally got my hands on a copy of the letters printed in hardback from my local library. There are 221 letters written between 1746 and 1752 and there are almost as many orange ‘post-its’ on various pages where I discovered more quirky facts and descriptions. The biggest challenge was whittling all that down to 43 minutes. I dip into the book from time to time and never cease to discover something new. There are daily weather reports, gossip about engagements and marriages, and reports of who is ill with what and who has recovered.

Gossip
At one point October 1752 the bishop writes to her with a really juicy bit of gossip about an older man of fifty, running off to Bristol with a fifteen year old, leaving a first wife and several children behind who were certain to be ruined.

Having learned that the man…
‘is drowned and his fair one with him, I don’t find anyone sorry, ‘ …he remarks.

Melons, Grapes Apricots in Pre Potato Ireland
What is stunning from what Dr Maxwell says, is that this is pre potato Ireland and yet they grew melons, apricots, grapes and pineapples in greenhouses in Kevin Street. Dr Maxwell says they grew exotic fruit not only to consume but to show how well off they were and for gift giving.

The Finery
There are references to fashions, hairstyles and buying fabric for Alicia’s new suit dress. Over the course of several letters he talks about buying her a new dress but nothing too flash, she was a Church of Ireland Bishop’s daughter after all. Alex Ward of the National Museum also talks in the documentary about the new fashion of silver and gold threads in fabric.

Giving A Voice to the Bishop
What really brings the letters to life are the way they are read by actor Simon Coury in the role of the bishop. The words committed to the page by a feather plume in 1750 could be the sentiment of any doting dad of his girl today. The language maybe a little archaic but the sentiment is as fresh and heartfelt as it would be today. He is always encouraging her to be herself, to improve her writing, not to be a slave to fashion and work on her self-esteem although he says it in his own way.

“Learn then to be a better. You have opportunitys (sic) enough: and remember my old Aphorism. Many things are not done because thought not possible to do. If I thought you incapable of improvement I would not exhort you to fruitless attempts. God Bless you, and your companions. I am my Dear Girl – Yours & c Edw:Elphin” 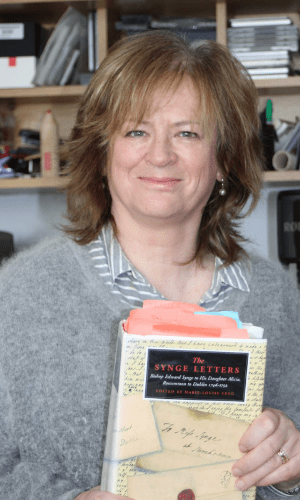 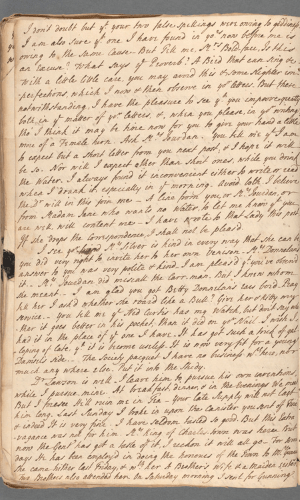 She’s Got This, You Got This
Scroll to top