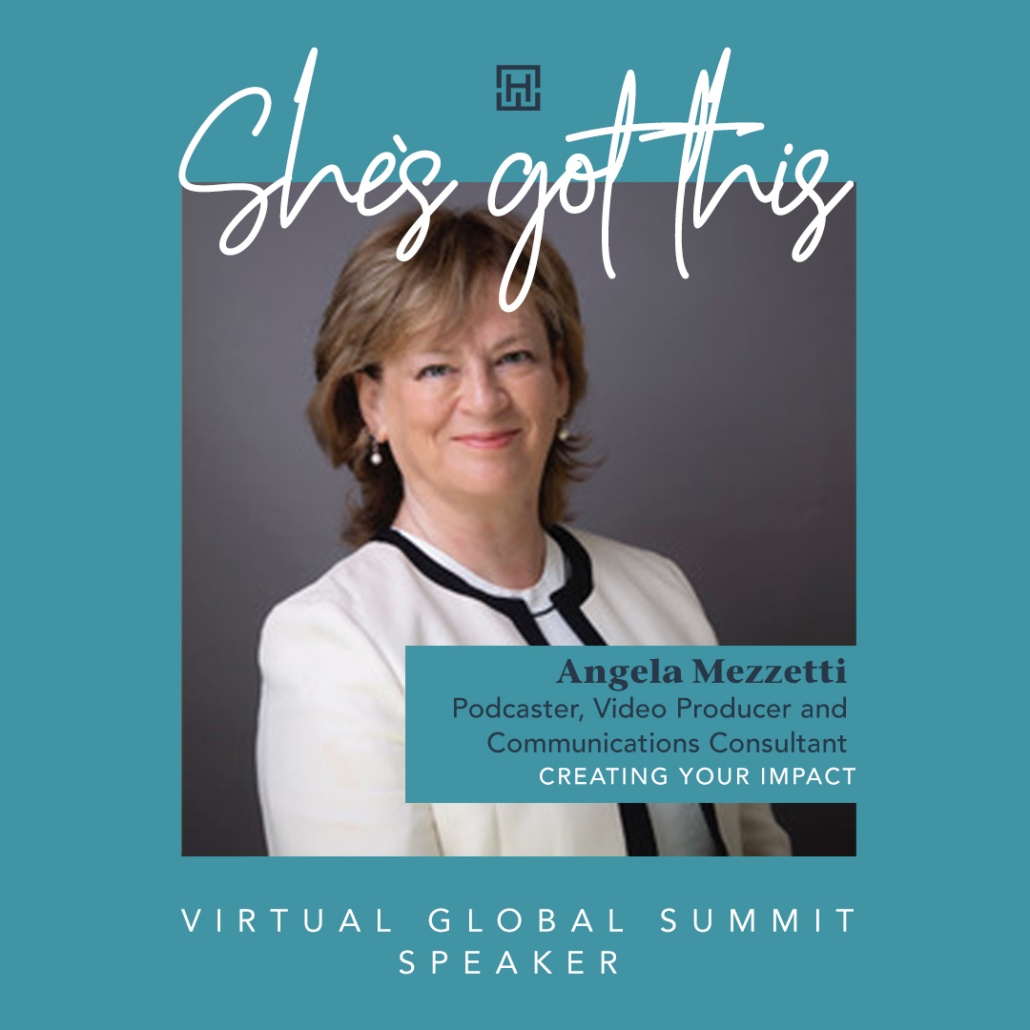 She’s Got This, You Got This

Are you one of those who is better at giving advice than following it? I hate to admit it but I am. I have been working in the communications business for years and have done live TV and radio and also weekly podcasts. So when I was asked to moderate a panel for Wealthiher’s Global Summit ‘She’s Got This’, on Leading with Impact for women, I surprised myself that my immediate reflex was one of terror. I think it was the word ‘Global’ that did it. One of my go to pieces of communications advice to others, especially women, is ‘always say yes to invitations to speak‘ just say Yes, hang up and then panic. Those opportunities do not come every day. I knew I was experiencing that sense of dread which I hadn’t felt for a while. I hadn’t done anything Global before so I had to do a serious bit of self-talk to gear myself up for it. Glad to say I eventually took a long breath, said yes, trusted that they knew what they were doing by asking me in the first place and then started to prepare.

Authentic You
When people are asked to take part in panels or to do an interview on radio, TV or a podcast, they can be filled with anxiety and with dread, so much so that they think ‘this isn’t worth it’. Their first thought often is ‘well I know someone else who would be better than me’. This happens to men as well as women but seemingly women are more likely to say ‘no’ initially to an invitation and for a variety of reasons. At a ‘Women On Air’ event a few years ago the head of news in RTE at the time, said they were committed to getting more women experts on news and current affairs programmes but that sometimes it was an uphill battle. He said even when they called up expert women to comment on an area of their expertise, the woman was reluctant to say yes initially, citing everything from childcare issues or a need to get their hair done or deferring to a male colleague. Fear and anxiety too might often have been in there but it would not be acknowledged upfront even to the person themselves. He went on to say that when they call on a male expert the response tends to go more like, ‘yes sure, what time do you want me there and what is the topic’. There is nothing wrong with this response but the difference in the typical reaction of men and women often reflects the way women and girls are raised. Men and boys are used to pitching, trying and trying again. Women and girls are raised to wait to be asked, and to not seem to be ‘too keen’. For both men and women though there are fears about performing in public that may be deep seated and rooted in an earlier ‘trauma’.

Common Fears
The fears list can be a long one, but usually includes the following in the mix;

‘I don’t know enough’, ‘I will make a mistake on live radio’, ‘my colleagues will think who does she think she is’, ‘I have a terrible voice’ or ‘I hate the sound of my own voice’, ‘I would be too nervous’, or ‘I did one of these before and the social media attacks I got were vicious’.

Make A List
The advice I give is to take a long hard look at your list, write it down and think of the flipside, about what is on the plus side. Think about things like who can I help by explaining an aspect of my knowledge that there is confusion around. Value your voice as a powerful tool that can change lives. Consider that there needs to be ‘more voices like mine’ heard on air. I can be a role model for the lack of diversity I see on TV and hear on radio. This will add to my skill set and my colleagues will be proud to say they work with me and that I gave our side of the story or that missing piece of information. Best of all my family will be so proud of me.

Welcome the Buzz
This is easier said than done I know, but when you decide to say yes to those invites and to feel the fear and do it anyway, you will get the courage and support you need, maybe even a bit of a buzz. You do have to trust yourself. You do have to listen to that little voice, your inner protector that is warning you about all of the things that could go wrong, but you have to make that a two way conversation in your head. You have to think ‘I hear you protector voice, but that was then, this is now and I GOT THIS.

The panel I had the pleasure to moderate on Leading With Impact went out on the Global Summit organised by Wealthiher on Thursday afternoon. All went really well. I got to talk with and hear from Gabrielle Branson, Deputy CEO, Kleinwort Hambros, Nancy Curtin, CIO Alvarium Investments and Helen Jones, Partner, BDO LLP and they are all fantastic with amazing insights into the new reality of working from home and managing all the juggling.